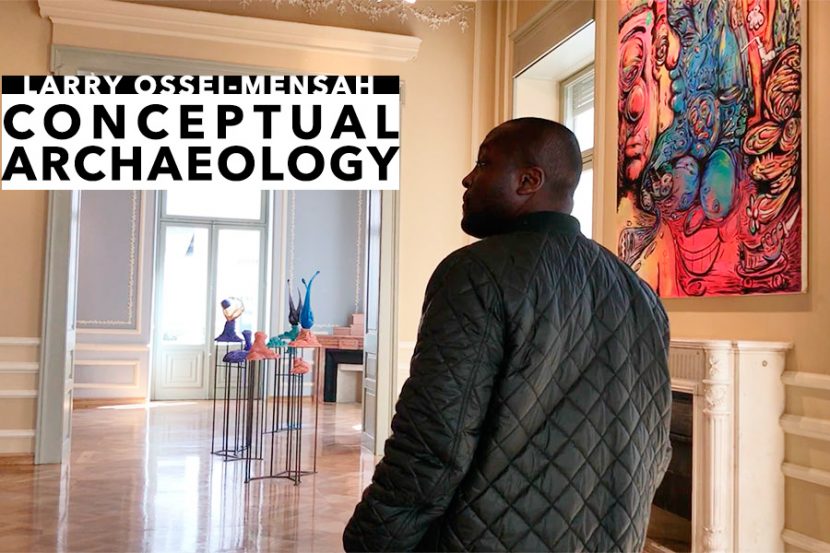 Towards the end of his residency, Larry had stated, “It’s rare in life that you have an opportunity to be in a place where it’s happening at that moment. You either are too early, or you’re too late. And so for me, it’s happening right now. That’s what’s exciting— is that we can shape the narrative how we see fit. And I think there’s an opportunity to—as Greeks have historically done—offer a new blueprint. In terms of how work can be seen, experienced, talked about…”

In February 2019, curator Larry Ossei Mensah took his globe-trotting to Athens to participate in the ARCAthens Pilot Program as the Inaugural Curatorial Fellow. It wasn’t his first time in Athens, but it felt like it was. Having a continuous six weeks to explore, coupled with the Outreach Program that ARCAthens provided, Larry got a cross-section perspective of Athens that he hadn’t tapped into previously. Between contacts from previous visits and new introductions, Larry had a network that allowed him to immerse organically amongst writers, artists, collectors, musicians, and also people who have nothing to do with the art world.

The uncertainty induced by tough times in recent years has driven artists in Athens to rise through their own means however they can. In looking at the creative activity in Athens, Larry commented on the strong emergence of DIY and pop-up spaces. He especially appreciated those built around a strong sense of supporting community—such as Victoria Square Project. Initiated by artists Rick Lowe and Maria Papadimitriou as a social sculpture participating in documenta 14, Victoria Square Project has continued on as a hub for the community, offering workshops and classes that are open to everyone. It’s an example of how vacant spaces—of which there are many in Athens—can be transformed to serve the community in a positive way.

Larry noted, “In Greece there are these unwritten rules and you kind of just do it…and then there are very firm rules on other things.” The activities that straddle this polarity to make things happen are what he’d like to see nurtured. One way he sees of supporting those efforts as a curator is in making introductions and encouraging more dialogue between the artists, communities, and institutions that constitute the art ecosystem. One aspect that he consistently came across in Athens is the enthusiasm people have for engaging in discourse. Open and ongoing dialogue would ensure that each is aware of what the others are doing, which would in turn build into a collective network that supports each other.

Community is a prominent motif in Larry’s explorations, and within that context, students and kids are often at the forefront of his projects. Larry makes an effort to involve schools and public spaces in his projects with the conscious objective of including young people in the conversation. The key is to enable accessibility and instill a sense of belonging—saying to them, “This is for you.”

At the Athens School of Fine Arts, Larry held a critique session with the students of Poka-Yio’s Lab. Interacting with young creative minds at their budding and vulnerable stage often reminds Larry of why he does what he does. It’s those conversations where he can offer guidance and learn from at the same time that he finds most stimulating. It’s also an opportunity to find those diamonds in the rough and recognize potential talent way before anyone else does.

In any given place or genre, Larry is drawn to what happens in areas outside of mainstream. Often the source of the most creative activity is where few are giving their attention to. His interest in what he refers to as the margins and peripheries is reflected even in his footprint around Athens—“leaving no stone unturned,” as he’d say.

Larry’s homebase during the residency was set up in Kolonaki—widely considered the posh area of Athens where high-end shops nest along with chic night clubs. But he also spent a lot of time in Exarcheia, which is just the next neighborhood over but is notorious for riots, blanketed with graffiti, and riddled with bullet holes—where students and anarchists mingle while the police are stationed in the surrounding outskirts. It’s in sharp contrast with Kolonaki and also where some of Larry’s Athenian young-artist friends find themselves more comfortable spending their time.

Through interaction with some other artists, Larry also became familiar with Kypseli, an area a bit off-center to the north where there’s no reason for tourists to tread besides maybe the few surviving Bauhaus and Art Deco buildings. Kypseli was once the second-most affluent neighborhood in Athens. When the wealth moved north, Kypseli opened up to a wave of the working-class and immigrants, which eventually turned into the bustling and dense mix of diversity found there today that has attracted many artists and musicians. This gem of a melting pot has not escaped Larry’s eye, who has already expressed interest in living there.

It seems there’s no form of expression that Larry isn’t willing to explore as he also went to see a Greek play called “Art.” Not understanding the language, he focused on cues from body-language of the actors and behaviors of the audience. The collection of such experiences is invaluable when considering his new role as guest curator at The Brooklyn Academy of Music (BAM), where he’ll be organizing shows and events in the new exhibition space.

When looking at this globe-trekking, diamond-digging, stone-turning, matchmaking culture-mixologist, one can’t help but feel that he’s much more than a curator. And when playfully thrown the label “conceptual archaeologist”, Larry’s eyes lit up—“Yeah, I like that. I’m gonna take that.”

And so, with a new umbrella under which he can grow his multiverse as an influencer of emerging cultures, Larry wrapped up his residency with this beaming testimonial:

“ARCAthens has truly been a game changer for me personally and professionally. I view this experience as another pivot point that has reshaped how I think about art, my curatorial practice and my world view. I came with the intention of learning more about the city and its art community, but I ended up leaving with more. I’ve develop a new network of friends and colleagues within the Athenian art ecosystem whom I look forward to continuing a deep and expansive dialogue with. I leave this residency with a renewed focus and urgency that will be a key catalyst that will drive the next chapter of my curatorial practice. I’m thankful to the ARCAthens team and board, for putting together a such a robust and thoughtful program for myself and Cullen. I have been forever changed!”