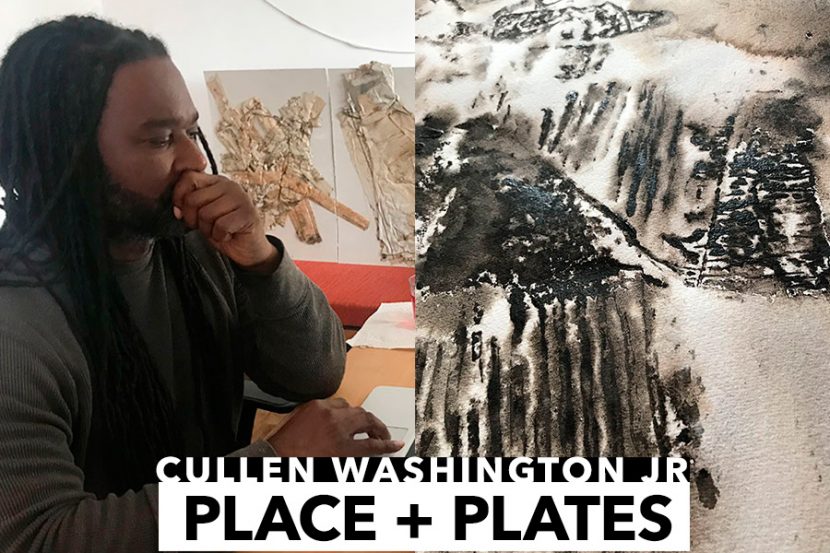 Such was the allegorical triptych that visual artist Cullen Washington Jr shared during his presentation at the end of his residency with the ARCAthens Pilot Program—poignantly illustrating the vast spectrum of values and behaviors that one can experience when given enough time to immerse in a culture.

As ARCAthens Visual Art Fellow for the Spring 2019 Pilot Program, Cullen lived in the central neighborhood of Metaxourgeio for six weeks with “a view of not only the Acropolis, but also the cultural strata that is reflective of the new color of Athens.” His living space was a one-bedroom apartment on a block dotted with fresh-sprung Chinese and Pakistani shops—an indication of the strong influx of immigrants that have been settling into Athens in recent years.

In his creative process, time is consciously utilized in what Cullen refers to as gestation. A mental image forms through an experience, which then “simmers and churns… over and over again, daily.” In time, the image becomes “an end result that is vague enough for innovation and invention, but strong enough to lessen the anxiety of how it will turn out.”

This gestation method was dynamically supported during Cullen’s residency, where the focus was on experience and process as opposed to concrete results. He described the outreach programming provided by ARCAthens as “almost turnkey… to integrate into the social and historic fiber of the city. With options almost every night for art openings and events that would surely make possible introductions to some of the leading contemporary artists the city had to offer.”

Getting to know multidisciplinary artist Poka-Yio, Cullen identified with his sense of play as facilitator of art-making. During Eozen Agopian‘s exhibition opening at Elefteria Tseliou Gallery, resonance was found in the beliefs that drive the art. At Nikos Papadimitriou‘s studio, boundaries of printmaking know-how were expanded. Through ARCAthens Assistant Director Iris Plaitakis, Cullen was able to dive deep into his long-held interest in the Athenian Agora. Each encounter was an active catalyst for cross-pollination and relationship-building with various artists and communities in Athens.

Before arriving, Cullen had a general strategy for creating something in Athens that he would not have done in New York. He knew that it would be something made by hand with very little mechanism. And, in terms of printmaking, he wanted to work with water-based inks so that astringent substances wouldn’t be necessary for cleanup.

The journey guided by these criteria was a form of another utility in Cullen’s creative lexicon: disruption. The setting of new work parameters in a new environment limited the usual access to familiar resources that he was accustomed to relying on. The effects of such disruption were demonstrated in moments like how he spotted that “particular piece of cardboard.”

Hours of junkyard-combing for materials yielded naught. But then it caught his eye, the most common packing material—laying about just so. Cullen was struck by the correlation between the undulating corrugation of cardboard and the architectural features of Athens that he’d been gestating—from the fluting in ancient columns to the rails embedded in modern sidewalks for guiding the blind.

A few more cardboard windfalls later, new fodder was hand-worked into printing plates which were then glazed over with pouring medium—completing the first phase in collagraphy. No cardboard in New York had ever sparked such excitement in Cullen. And none may well ever as he admitted, “I would never have made these in New York.”

The sense for experimentation was pushed even more when an attempt to pull prints with woodblock ink literally did nothing. And even after switching inks, Cullen found himself finessing with spoons in order to get the desired effect. Through this challenge, Cullen developed a new set of crafting techniques that he hadn’t considered before. The resulting prints are transformative, seeming as though the simmer and churn had happened as much on paper as in Cullen’s head.

From collagraph plates made from Athenian cardboard to friendships made while eating from the same plate (metaphorically and literally), Cullen has already started gestating future developments to build on his experience in Athens—continuing to evolve in multiple aspects long after the residency has ended.

Before leaving New York, Cullen recalls being instructed by an acquaintance, “Take more than you give. Now is the time to take.” To which he now has the response, “I ate my fill…in experience, and food, and people. Now when I get back to New York, it’s time to give. Give back.”